The 2016 Carnarvon Motel, Pinjarra Engineering Carnarvon 360 has now been run and won, but the second half of the event has been an absolute thriller. With Agrela leading Elphinstone and Smith at the end of Day 1, the scene was set for a titanic battle during Sundays racing. But first the spirit of the sport was on full display on Saturday as many competitors were helped out by fellow competitors and Carnarvon locals chasing up Turbo 400’s, steering boxes, patrol front diffs and various different parts just to ensure that competitors could get back into the race on Sunday.

Sundays first section turned the running order on its head, with Darren Agrela out early on lap 1. Shane Elphinstone assumed the race lead until they dropped a belt, costing the #44 Pro Buggy over 20 minutes. After getting back on track they put on a massive charge back through the field, slicing past competitors in dusty conditions. Brett Smith lead the field home in the section to lead the event by just under 2 minutes ahead of the final 2 laps of section 3. Brad Cooper was poised to strike in 2nd position, with Brett Renton not far off the pacein 3rd outright. After his DNF yesterday, Andrew Sawyer rocketed through the field for the 4th fastest time of Section 2, with Peter Doney, Ben Armstrong and Leigh Cooper the next best runners.

At the start line of section 3 the race was turned on its head when the outright leading #161 buggy of Brett and Deanna Smith wouldn’t start. They missed their start time and Brad Cooper assumed the lead on track. The Smith Prolite fired up and got back out on track only seconds after Cooper had left the line. Cooper needed to put almost a minutes gap on Smith to take the lead on corrected time. Through lap 1 Cooper had gapped Smith, but Smith still lead on corrected time by 8 seconds. Brad Cooper realizing that he was locked in a massive battle pushed hard on the final lap and managed to take the event win by 6 seconds from Smith in one of the most thrilling nail biting finishes the sport has seen! Brett Renton took out 3rd outright to the delight of the home crowd.

Shane and Curt Elphinstone again pushed hard setting some quick times in the final section to take out 4th outright and valuable points for the championship. Chris May in the 766 Production 4wd put in a massive drive to take out 5th outright and 1st in class. Darryl Hardman just snuck ahead of Peter Doney to win the Extreme 2wd class battle with Dirk Van Geest, Russell Cullen, Gary Kirkwood, Ben Armstrong and Owen Davies the only others to complete all 6 laps

The spectacular event has certainly been a great addition to the 2016 CAMS, PGS Industries WAORC and is definitely one to mark down on your calendars for 2017 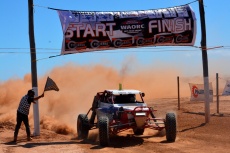