Day 2 of the Carnarvon Motel Three Springs 360 has been an eventful one, with close racing, difficult weather and some epic duels. The day kicked off with a section of 2 laps in which Darren Agrela would lead out the field. With beautiful clear skies and slight winds, the conditions for racing were perfect. As Agrela lead the chasing pack away he would light up the time sheets, quickest for the section and extending his lead over Beau Robinson. Harleigh Uren had been seeded after his blown diff yesterday and he charged hard, piloting the One Speed Racing Pro Buggy to second quickest time just ahead of Beau Robinson. Stephen Phillips maintained his strong run with 4th quickest and the scene was set for a big scrap heading into the last section. It wasn’t all plain sailing for all though, Mark Murray broke a pitman arm early on whilst flat tyres slowed Chris Unstead in his Westvolt Electrical Can Am.

Between sections there was a deluge of rain in the southern regions of the track which meant that the last section would be cut down by approximately 10kms as conditions were incredibly difficult. As Darren Agrela took off, conditions were like an ice rink, but that didn’t stop Harleigh Uren, who was out of the running for outright from playing some games. He parked his #77 machine 100m after the start line and waited for Beau Robinson to come through. He then took off and chased the OBR driver, the 2 having a good tussle before Uren finally got the better of the #413 and drove away from him. Back through the field, Phillips was still in a strong position, whilst Jake Clucas continued to lead the Prolite field and was knocking on the door of the podium positions. The WA Off Road Junior Development Kingswood would unfortunately develop terminal issues which put Matthew Beck out of the race, however he has already shown that he is able to handle any condition that off road racing can throw at him

The last section was proving to be an absolute corker as the remaining competitors battled it out. Harleigh Uren had caught Darren Agrela and they swapped positions many times, thrilling the crowds who were watching on from many spectator points along Strutton Road. Uren would be first across the line, but Darren Agrela took out a superb 1st outright and 1st in Pro Buggy. This was a huge result for the Undecided Racing Team who have gone so close so many times in the past. Beau Robinson crossed the line to take 2nd outright and first in Extreme 2wd, whilst Steven Phillips rounded out the top 3. Jake Clucas won the Prolite class, beating out Mal Yeardley for 4th outright. Ben Armstrong had been a quiet achiever all weekend, picking off competitors to seal an 8th outright and first in Production 4wd in his Bottlefed Racing Patrol. Garry Povah was first in Extreme 4wd as only 11 competitors completed full race distance. 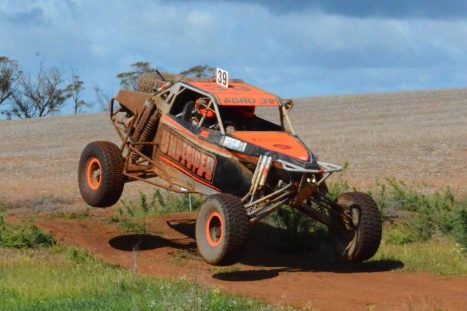 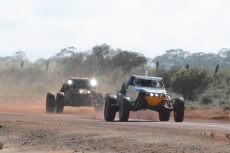 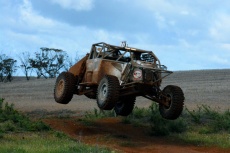 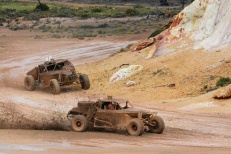 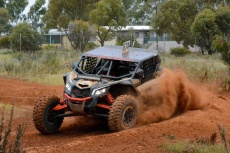 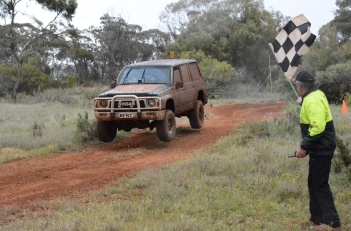 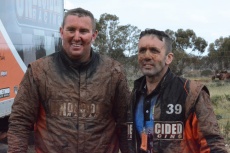